Mahaffey's new shroud concept, It's another first in my quest to be the best. Mechanical and Electric fans together in one shroud. Never been done before 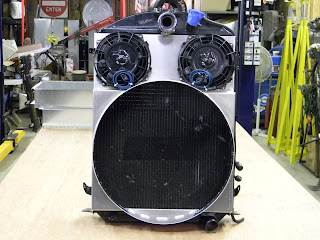 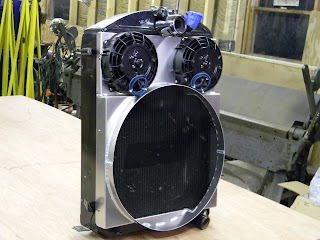 Posted by Bill Pratt at 8:45 PM No comments:

Wow, the lift is a hit! The ability to clean all the street wear from under the Roadster was the difference, and won a TOP 75 award at the East Coast Indoor Nationals 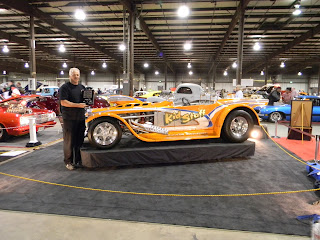 Posted by Bill Pratt at 6:23 AM No comments: 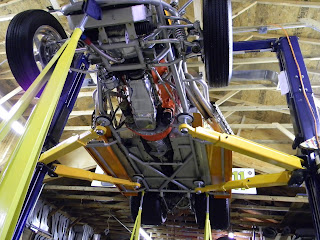 Posted by Bill Pratt at 6:13 PM No comments: 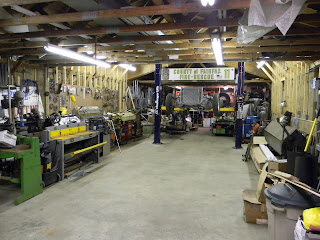 I have done all the work myself, I just like it that way.  I take my time and put forth the extra effort to get it right and then some.  The prolonged rain stretch we've had around here has'nt helped things either.  I love the challenge of building it alone, much in the same way I build my cars.  For me, it's not what you can buy, it's what you can create yourself.
Posted by Bill Pratt at 10:11 PM No comments:

Irene may have been a blessing!  I always wanted a lift in the shop for under car fabrication, but did'nt have the ceiling hight required.  So I decided to rebuild the damaged area at 12 ft high to give me the room I need.  The other thing I have been wanting is a paint booth.  Again I have decided to use the area (20X24) just past the damage for a paint booth/finishing room/clean room.  Anyway, I have been doing all of the rebuild by myself, because I like it that way.  I've had many offers to help from my Fire Department and Hot Rod buddies, truth is I like doing things myself....go figure.
Posted by Bill Pratt at 2:59 PM No comments: 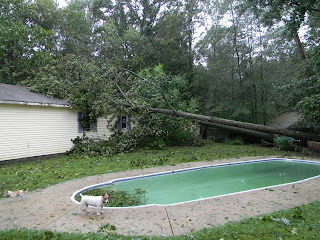 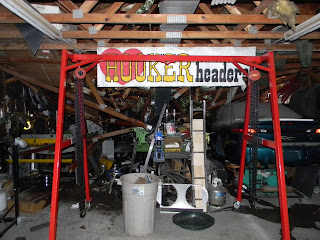 Hurricane Irene dropped two lage trees into the shop on 8/28/11.  A forty inch diameter tree crushed thru the roof destorying ten roof truss' and cutting four feet into the wall.  The damaged area did not hurt any cars or equitment, just made a huge mess and alot of work to repair.
Posted by Bill Pratt at 9:47 AM No comments:

Why are there no driver warning devices down track in drag racing?

We all see warning devices on a daily bassis.  Most of these devices warn us of safety situations (ie thermal, electrical, mechanical), or things that will cost us money (ie your car guages, overheating, no oil pressure).  Racers competing at high speeds need advanced warnings of dangerous conditions on the race course.  They have this in place at the motor-cross races with flag men on the corners.  In NASCAR and other round (closed course) competition there are YELLOW lights that can be activated to advise of an oncourse incident.  In drag racing there is NOTHING!  WTH!  There needs to be a down track warning device that will inform the drivers of a race problems/issues.  It could be a track surface issue (ie fluid, parts, debris, animal, RAIN).  Or it could be a problem with one of the competitors cars that was noticed as they left the starting line.  I would have YELLOW warning devices at the 1/8th mile, 1/4 mile and last turn-off.  In conjunction, I would have the very large score boards FLASH the data on and off.  The starter should have a switch/device where he could flash the reds on the tree, and not depend on the tower for that.  Not running around waving his hands, (thats cave man comunication).  Early intervention is the name of the game, and the competitors are locked on the tree...ACTIVATE THE REDS!  An official should be positioned down track who would also have a controller for the warning devices.  He would be able to see top end issues that the starter may not.  Last but not least, the extremely fast cars may need a radio controlled warning device in the car.
Wade Mahaffey
Posted by Bill Pratt at 10:23 AM 1 comment: 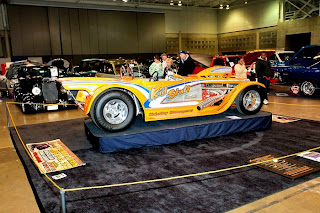 This is the Ocean City Hot Rod Show, the first show of 2011.  The first for my fresh built Turntable, I finished building it at midnight Thursday.  Friday morning at 8am I was unloading it, in the Convention Center.  Two hours later the car was on it and rotating.  The Roadster picked up a 1st Place award
Posted by Bill Pratt at 9:39 PM No comments: 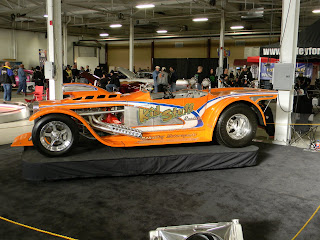 Had a great time at the show, with the Roadster on the turntable!
Posted by Bill Pratt at 10:10 PM No comments: