"I MET A BUNCH OF HEROES TODAY" 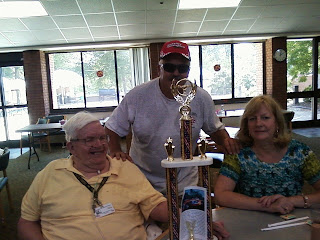 I took the roadster to a car show today.  it was at the Veterans home in Charlotte Hall Maryland.  I got there a little late, but I arrived to find the veterans roaming around looking at the cars.  I got out and shook as many hands as I could.  I told them it was my pleasure to meet them (most in wheel chairs).  I did'nt get to spend much time with my car show friends, for I was focused on the reason I enjoy myself today USA VETERANS.  I got a trophy just like everyone else.  When I think of a trophy, I think of a champion.  After everyone got their trophies and had left, I marched my trophy in the building and found a "REAL CHAMPION"...."A REAL HERO".  I found Mr. Gilbert Wurzbacker a Korean War Veteran who served on the USS FRANKLIN D. ROOSEVELT.  The second of the three Midway Class Aircraft Carriers.  Then from 1958 to the early eighties was a Baltimore City Maryland Career Firefighter. Mr. Wurzbacker is a Champion and I awarded him my trophy. "I MET A BUNCH OF HEROES TODAY"
pictured is Gilbert, myself, and Gilbert's daughter Shirley.
Posted by Bill Pratt at 5:20 PM No comments: 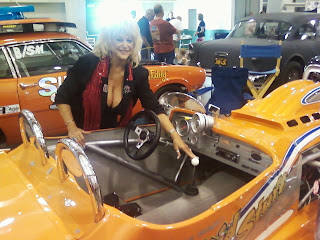 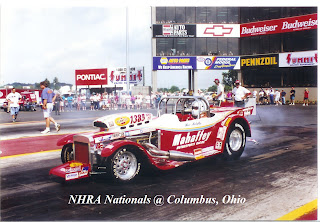 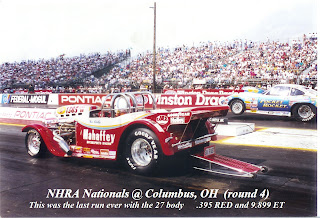 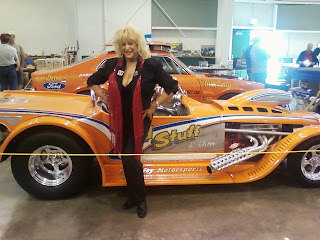 Linda Vaughn "Miss Hurst Shifter" spent a few minutes with me at the York Reunion this past weekend.  She remembered the Roadster from it's life as a NHRA Super/Gas racer.  The last run down the quarter mile was round four at the 98 NHRA Pontiac Excitement Nationals in Columbus Ohio.  I had just taken out two former NHRA World Champions in the two previous rounds.  I had just cleared the tower tunnel and was the next set of cars to go in the water box.  Standing there was Linda, she walked over to the car leaned in to the cage in front of me and said "I love this car" and I was no good after that....went .395 red.  Here are a few photos of that run, now that was big time racing.  Also a few photos of Linda with the car as it is today.  To the right of Linda leaning in the car, is the actual 55 Chevy car from "Two lane blacktop"
Posted by Bill Pratt at 10:56 PM 1 comment: 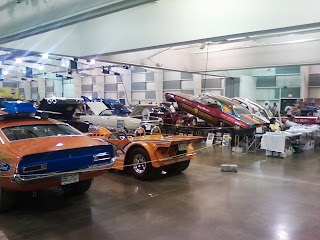 The Roadster was in the company, of some of the greatest drag racing history of all time.  Famous Fuel Dragsters, Funny Cars, Gassers, Super/Stockers and Stockers of yesterday.  Many of them sporting lettering on the side that read NHRA RECORD HOLDER (and then the date) WOW... that is some really cool stuff in my book!