Memorial Day is a day to reflect on the "Real Heroes" of our Country's history.  Men that fought and some that died that made it possible for us to have a decent life.  Those of us that were never there will never know the horror that they went through.

Thinking of you on this Memorial Day
Respecfully, Wade Mahaffey

Posted by Bill Pratt at 5:32 PM No comments: 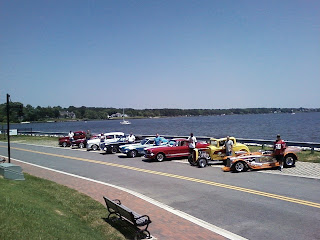 A great time was had by all in attendance.  The cruise that consisted of about a three hour tour (not like Gilligan's island) thru five Counties in Southern Maryland.  There were no incidents or issues during the ride and the weather was perfect.  This was a plan that I had since last year, but never did happen.  I thought a ride like this would/could be weekly or at least monthly, but did not recieve much response.  Lawrence Morris and I were riding on Sunday and decided to take a ride on Monday (Memorial day), then it clicked.....the five County!  It's so much more fun riding than sitting around.  I look at it like this...can you imagine having a shiny new bike as a kid....and not riding it....come on now!  Anyway, It was short notice and I apologize to anyone who felt left out.  We made alot of phone calls, and these folks showed up ready to go!  (from left to right)

Walt Spangler (40 ford), Raymond Good (68 Camaro), Lawrence Morris (55 chevy), Norman and Mrs. Burch (66 Plymouth), Steve Garner (67 GTA Mustang), Harry Adams (65 GT350 Mustang), Derek and Hope Johann (32 Ford), Wade Mahaffey (27 Roadster), Duayne and Rose Milstead (Dodge Challenger not pictured) was there for half of the ride but had other commitments.  Thanks to all who participated and had a good time...I KNOW I DID!

The photo was taken after a Roy Rogers lunch at Solomons Island Maryland.
Posted by Bill Pratt at 4:12 PM 1 comment: 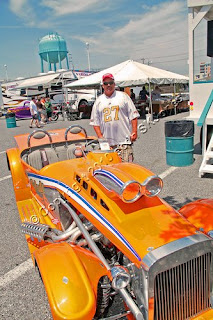 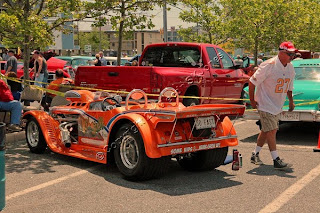 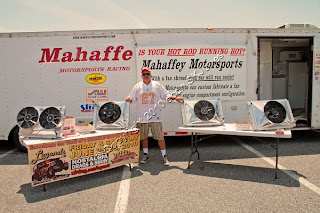 A few photos by Stephen Jones of Dave Bishop's East Coast Drag News, at the OC Convention Center.  Thank you Stephen
Posted by Bill Pratt at 10:25 PM No comments:

Thank you Mr. Bill Goodwin for two great nights of "Drive-In" fun.  Bill has an awsome set-up for watching Movies outdoors.  Oh, did I mention Bill has quite a collection of nostalgia drag racing videos.  (If you look close, you'll notice the name "Bill Goodwin" in some of the credits at the end of these great movies).
Posted by Bill Pratt at 8:24 PM No comments: 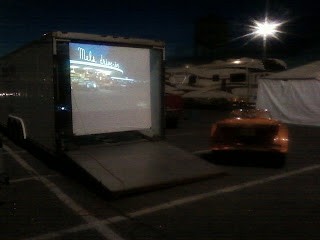 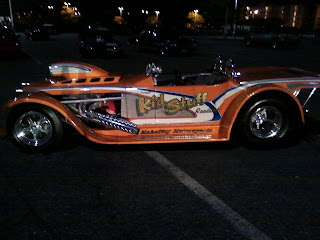 The "Kid Stuff" Roadster picked up a trophy while in Ocean City during the record setting event.  What a great time we had win or not, it was a really nice five days bathing in hot rods, and watching American Graffiti drive-in style on the trailer!  Thank you to the complete staff of Special Events Productions Inc.
Posted by Bill Pratt at 6:41 PM No comments: 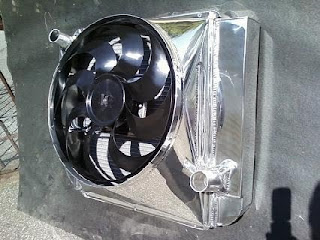 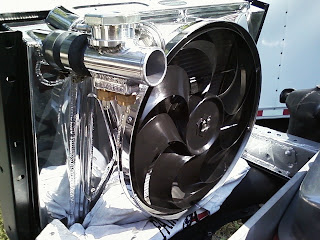 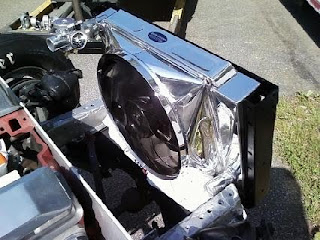 A major factor in any automotive enjoyment, is the cooling system.  "IF IT RUNS HOT, YOUR NOT GOING TO BE A HAPPY DRIVER." The Mahaffey Corvette must accomplish this while maintaining alignment with the NHRA and IHRA rule book.  I am using a PRC radiator that fits the unaltered factory Corvette core support nicely.  And an electric fan is OK in Super/Stock per NHRA and IHRA rules.  The custom shroud serves as a mount for the fan as well as a component to maximize cooling potential.  The Corvette shroud was more difficult to build as the radiater sits on an angle in the car.  More time and effort is needed during fabrication to fit the radiator angle while the fan finished vertical (straight up and down).  Also pictured is the Mahaffey operations and monitoring manifold in the upper hose.  This feature is nice, in that it has an inline temp guage, bungs welded in place for a thermostatic control switch with over ride capability and High temp visual and audible driver alarm.    5/27/10
Posted by Bill Pratt at 6:25 PM No comments: 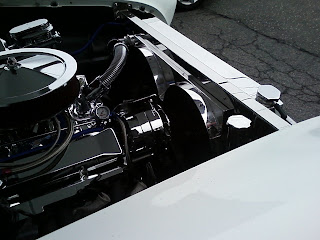 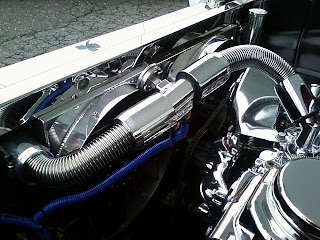 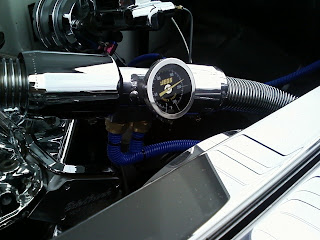 Lawrence Morris of Bushwood Maryland, was kind enough to let me shoot a few pictures of the job I did on his fine 55.  He was really having serious problems with his existing cooling set-up.  I took the time to explain my cooling packages to Lawrence, and he decided to go with the "F-5 Tornado" dual fan set-up.  Long story short, we lowered his temp a good 50 degrees.  Now Lawrence is a happy man!

I also used a Mahaffey custom "operations and monitoring" manifold inserted into the upper radiator hose.  This allows the use of thermostatic control switches, warning/alert components (in situations where a driver may forget to activate a system by toggle switch), interior guages and/or an inline guage (pictured).  These are custom tailor made to your needs, and eliminates all of the additional lines into the intake manifold.  In lawrence's situation we used an inline temp guage and two thermostatic control switches.  Fan (A) comes on at 185 and goes off at 170 and fan (B) comes on at 195 and goes off at 185.
Posted by Bill Pratt at 5:31 PM No comments: 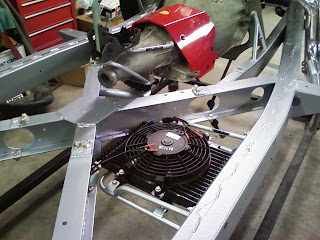 The Corvette is coming along nicely.  The shifter is mounted directly to the transmission.  This will allow trans and/or converter changes without linkage issues.  The trans cooler is mounted on the frame near the trans.  Quick disconnect fluid lines will simplify removal and installation.  Mounting detail for both was fabricated using 1/2 inch chrome-moly tubing.
Posted by Bill Pratt at 3:04 PM No comments:

http://www.theprideofthehighway.com/fullstory.php?27510
Posted by Bill Pratt at 10:28 AM No comments: